There are two babies born a day with Spinal Muscular Atrophy and yet it is relatively unknown.  That’s one of the reasons Sheila Violette decided to begin a campaign to raise awareness of this incurable and tragic disease.  The other is a great deal more personal.  Sheila Violette is the grandmother of a young child named Ann Marie (Annie Girl) who sadly passed away from Spinal Muscular Atrophy, or SMA.  “She was diagnosed when she was three months old.  They told us she had sixty days to live.  She lived until she was nine months old.” 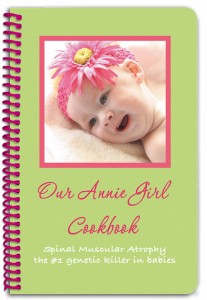 When Sheila and her daughter were first told about Annie’s condition they were caught off guard.  “We were shocked.  She was a completely healthy little baby girl, smiling all the time, but early on we noticed that she couldn’t lift her head.  When they told us she had SMA, we hadn’t heard of it before.”

Although relatively unknown, SMA is the number one genetic killer of babies.  1 in 40 people are carriers, unknowingly.  1 in 6,000 babies are born with SMA.  “The gene can be detected with a simple blood test,” explains Violette.

Raising awareness of a disease is a tall order, which is why Violette turned to Gateway for a fundraising cookbook.  “We looked at several companies but we ended up with Gateway because they had the perfect pink coil and they were able to print dividers with a pink tone to them.  We dressed Annie in pink all the time so it was important to include pink in the book’s design in every way we could.  Gateway did such a great job of helping us design the entire book.  The pink dividers included Annie’s picture on them.”

Violette has a lot of energy for the cause, holding fundraisers throughout the community including a Scrapbook Event and a Corvette Retreat.  “Over forty women gather in a local church to produce scrapbooks that showcase family memories.  The books are sold there with net proceeds to the SMA.  We also took books to our annual Corvette Retreat, which is an event that celebrates the fact that we manufacture Corvettes in this part of the country.  All the books we brought sold out.”

The Annie Girl fundraising cookbook contains over 300 recipes and a touching description of Annie’s story.  All profits from the sale of these books are directed to the Families of Spinal Muscular Atrophy (www.fsma.org).  For more on Annie’s story and to order cookbooks, go to www.4anniegirl.com.