What Do Girl Guide Cookbooks and Cinderella Balls Have in Common? 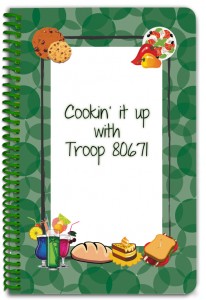 To celebrate the one hundred year anniversary of Girl Scouts USA, Jodi Hautala-Carlson produced a fundraising cookbook with Gateway Publishing. Jodi is the driving force behind Troop #80671, a Girl Guide troop operating in Conneaut, Ohio for the past 21 years. Funds raised through the sale of the Troop’s cookbook will be directed to various activities including Girl Guide awards, the 100th Year Celebration for Girl Guides U.S.A., and a Cinderella Ball to be held in 2012.
The book includes 325 recipes – each important to girl guides – which includes “Thinking Day Recipes”, “Girl Scout Cookie Recipes”, and “Campfire Recipes”. The book also features practical information for girl guides including the “Girl Scout Law, Promise, Slogan, and Motto”, and a section at the back that allows people to add their own recipes.
Besides being the Leader who spearheaded the fundraiser, Jodi is also a graphic designer. It was her design background that drew her to Gateway. “We looked at a bunch of different sites but Gatebook.com was the only one that let us design our own. I designed the Inserts – the whole thing.”
The #80671 Troop is selling its cookbooks through various channels. “We told all the other troops across the country, our friends and relatives. We’ve placed it on Facebook and someone even wrote a blog for us, but the main reason is to raise funds for our Cinderella Ball. We’re doing it up right with gowns, dinner, a DJ, a backdrop and a ceremonial bee. There’s still plenty of time until the ball which leaves us with lots of time to sell more cookbooks.”
To buy a Troop #80671 Girl Guide Cookbook email Jodi at jodi.hautala@gmail.com
For more background on the troop and its cookbook project, visit the following blog post on the Albany Kid:
http://albanykid.com/2011/11/29/girl-scout-recipes-cookbook-marks-the-100th-year-anniversary-of-girl-scouts/