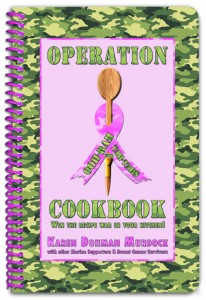 Not only chock full of great recipes, including a section of recipes from local Houston celebrities, the cookbook also contains numerous uplifting stories from cancer survivors.

Another charity dear to her heart, because of son Chad being in the Marines, is The Marine Corps Wounded Warrior Regiment.  Karen has combined these two concepts into her fundraising cookbook Ooh-Rah For Tah-Tahs.

Check out her website, www.ooh-rah-for-tah-tahs.com to read the full story of her remarkable journey and to learn how you can help raise money for both these worthy causes.