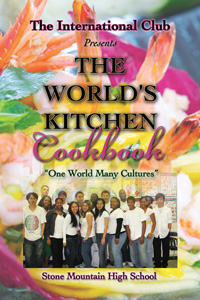 That’s the price for a copy of “The World’s Kitchen Cookbook“, which contains the Obama family chili recipe, submitted by First Lady Michelle Obama via her scheduling office. The presidential concoction is among hundreds of dishes showcased in the unique, globally inspired cookbook produced by The International Club students at Stone Mountain High School in DeKalb County, Georgia.

Just like the students who created “The World’s Kitchen Cookbook” the recipes hail from all corners of the globe including Spain, Vietnam, Cambodia, East Africa, Bosnia and other places. The compilation also features pictures and educational data such as international currency information, biographies on global heads of state and historical facts.

Lisa Fátimah Armorer, the club’s sponsor, says that the fundraising cookbook is a useful resource that can teach people about the very places from which the featured dishes originate. She notes that the international flavors highlighted in the fundraising cookbook are authentic, as they were provided by the families of students who comprise the school’s International Club.

And it was Ms. Armorer’s own persistence that led to the acquisition of the Obama family chili recipe for the project, which was published in 2009 by Gateway Publishing’s fundraising cookbook division.

definitely one of the more unique cookbooks that we’ve been a part of,” says Rhonda Pineau, Sales and Marketing Manager of Gateway’s cookbook publishing division. “Between the President’s chili and all the great global recipes it’s no surprise their initiative has been so successful!”

To estimate the potential of your cookbook fundraiser project, try our profit calculator!